Also this time your new creations seem really beautiful to me. As always! When artistic talent blends with the sensitivity of the heart and the aptitude for beauty, the miracle is accomplished. 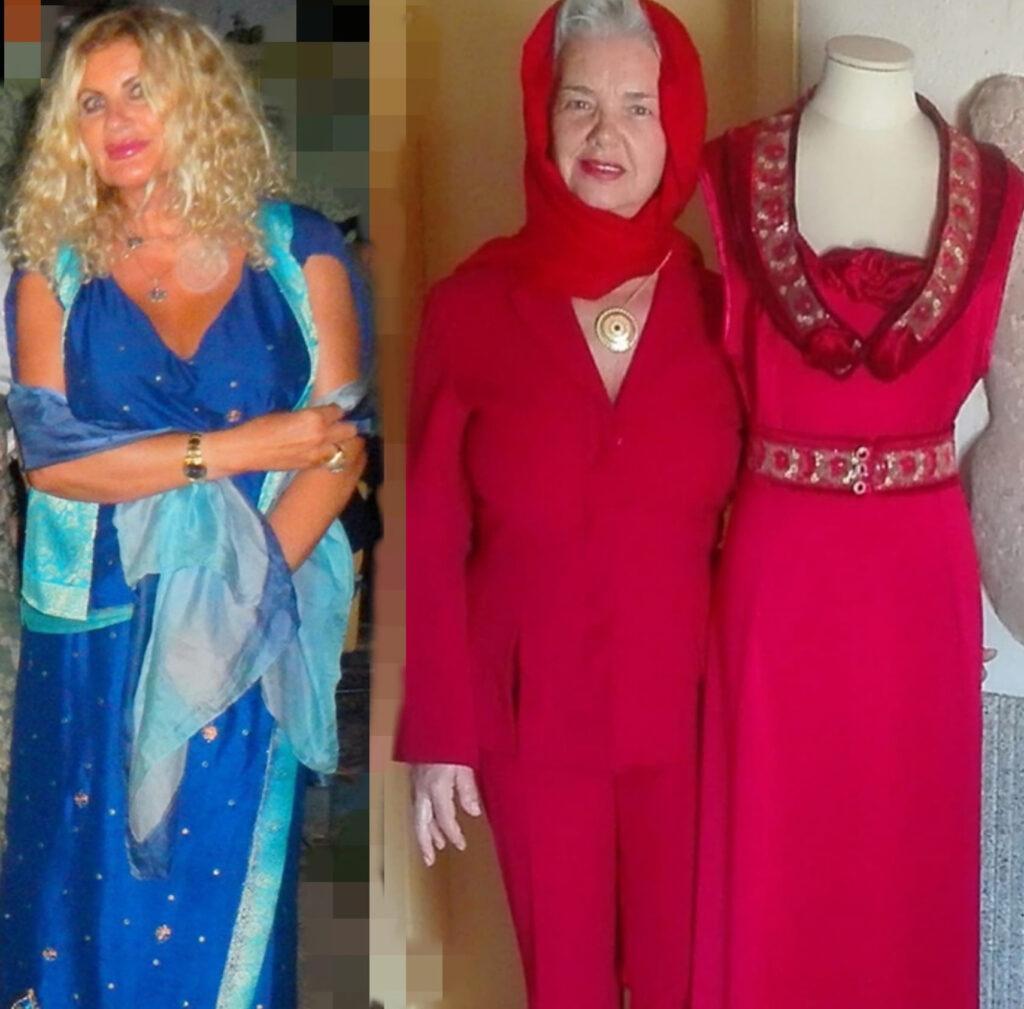 As I write, dear Evi, I imagine you as one of the Janas of our Sardinia.
Legend has it that these industrious and wise fairies who practice different arts love red.
In fact, I’m wrapped in the perfume you just created and I’m wearing one of your MOM jewels around my neck.
Even the cream that nourishes my skin making it more beautiful every day is your doing.
You can design clothes and jewelry, you can sculpt, paint, sing and you know the secrets of herbs, flowers and essences.
You have the gift of listening and a sensitivity out of the ordinary; you are creative and operative, sweet and tenacious, wise and generous, wonderful daughter of Sardinia.

The center of Gallura finds its privileged terrace towards the eastern sea in an enchanted territory rich in traditions and fine vines in the municipality of Telti.
A hilly part of Gallura that slopes down towards Olbia with slopes covered by vineyards and thick cork trees.
Evi was born and raised in that portion of the territory before walking the paths of new knowledge in the poles where the culture, above all musical, of the new generations of the final years of the last century developed.
Definitely, it must be recognized that he has a natural inclination for music. He has practiced it with competence and passion since his early youth.
From this she let herself be guided as on a musical scale, in the subsequent evolution of her art into a more complete realization, taking over the scene with her creations, from dresses to jewels.
Everything follows a chord as a set of linked notes, inspired by the great Mediterranean Mother. That Mother Goddess who found her highest figurative expression in Sardinia.
Each note is in itself an individual element but also a part of a score that Evi fills with her ever-evolving works.
The note of a perfume, a fabric she worked, a jewel created, a song she sang, everything recalls a story and a land, her land, full of stories to tell and relive with an ancient symbolism that it is presented to us in a modern key.
The cultural archetype, that is, the idea behind Evi’s creations, is the revival of the eternal models of things.
A primordial image that is part, more properly is contained, in the collective unconscious and which is brought to the surface by the research and painstaking reconstruction that she makes of it with her art in all the expressive forms she adopts.
A representative function that conveys us towards a form of perception of reality that is proposed to us through expressive forms of various kinds and in whose display the alchemist who etherizes them with his fragrances is never lacking.
And it is from these fragrances that now a line dedicated to cosmetics is born.
Evi is linked to her land and it shows. We are made of matter that as such emanates energy that it receives from everything around us and that it transmits in a continuous cycle in a perennial process. Evi’s work develops in that environment rich in ancestral memories, and her fervent and unstoppable imagination is fueled by it, and this aspect is what stands out with great evidence when you are in front of her creations.
What to add about your work? Perhaps an invitation to visit her in Telti, where she welcomes her guests with grace and courtesy in her workshop house in a charming village setting, almost under the bell tower of the granite church of Santa Vittoria. He will open the doors of his dream world linked to the past and maybe even offer you a glass of excellent Vermentino produced a stone’s throw from his home.

There is order and harmony in the artistic productions of Elvira Angela Pattitoni, known as Evi, in the Jewels as in the Dresses and in her voice as a musical interpreter. As an artist, his creations show themselves not only as a work of artisan skill, rather as the result of his personal creative research that flows into a path full of ideas between the history of his land with that of other places and times, contaminated one with others in a skilful mix of past and innovation.

His art moves from the thread that holds the micro with the macro cosmos, the symbols of our restaurant with the signs of the universal. Evi does not fall into the error of neo-ethnicism or folklorism. Avoiding these traps, he arrives at a balanced and accurate cosmopolitan synthesis, with the fading scent of Sardinia. The unripe vestals proposed in his fashion shows seem to come from a distant, different world. Keepers of memory, they remember the Arborean queens of the fourteenth, as I think them. Modern and current like today, perhaps anticipating a possible future trend.

The jewels, then, are real “Prendas”. Archetypal jewels, as she defines her creations. Works inscribed in circular shapes that are replicated, referring to the most ancestral past of Sardinia, which is a Mediterranean, biblical, Christian, oriental past. Symbolic representation of the cosmos, woven from sheets and threads of gold and colored stones, like mosaics of sublime temples. Figures interwoven with colors and shapes in symmetrical harmony. Representation of the horizon and the sky. Symbol of the celestial sphere, dimension of the universe, like the halo of Christ in Cecilia Sanna’s icons, icons featured in the short film “Divine Measurements”, unpublished, the latest creation by Evi.
As the Great Mother, representation of the primordial divinity, parent, and nurse, holder of the secret of life and consoler of death.
It is worth letting yourself be seduced by Evi’s creations, in her events, in the show rooms.

Since the time of my cultural commitment to the Porto Cervo museum, my friend Evi told me with transport of the transcendent experience that enchanted her when she saw the Stele of Boeli, which is estimated to date back to 3,500 BC, “sa perda punta”. The magic of concentric circles and infinity inspired her for the creation of MOM.
MOM is the result of the marriage between styles and eras that are very distant in time, such as the Sardinian-Byzantine, the Etruscan and the Hispanic Aragonese, and carries within it the material fusion of these cultures.
The concentric circles that distinguish it are composed of symbolic numbers and archaic figures whose final combination is the symbol of rebirth, the archetype of the Mother Goddess, a sacral figure in the Nuragic culture.

MOM contains the sacredness of prayer in the depths of its essence:
● prayer as the love of a past that formed him and a bond with the present that he embodies day after day,
● prayer as an absolute need for love,
● prayer as an encounter of souls in the great arms of the Mother Goddess.
MOM is something more than a very refined and elegant jewel, if anything, a symbol that does not suffer from fashions, it is “eternal”, it is a trace of a distant past, which the Stele of Boeli tells us about, and a projection of a future without limits.

There is in MOM the sense of infinity and Evi’s erudite approach to the use of the archaic language that every civilization discovers in its past, a lexicon intended as the building block of life.
Evi gives us a rare example of craftsmanship which, based on ancient and historicized realities, becomes art.
Her particular and skillful way of seeing and interpreting reality with refined dexterity and knowledge of materials make Evi an artist who has relied on the skillful skill of the artisan experience to create an object that is a true work of art.

The attentive visitor to the land of Gallura will not have failed to appreciate all the set of characters that have contributed to making it famous in the world. The granites, the holm oak woods, the transparent waters make up a unique setting: both harsh and harmonious, where the vestiges of an ancient past are grafted solemnly with their respectful simplicity. Evi’s works well represent this peculiar genius loci.

The artistic urgency that has always accompanied the artist’s work is accompanied by an original style that, at the same time, wishes to fulfill the dictates of a cultural archetype that does not fail to spread in its most intimate characteristics, of which, ultimately , every Gallurese and, more generally, Sardinian artist remains indebted.

This union is accomplished and is testified by the research of the chosen materials and the care in the realization of the works, whose undisputed genuineness, without compromise, is always combined with a formal rigor respectful of tradition.

This website uses cookies to improve your experience while you navigate through the website. Out of these, the cookies that are categorized as necessary are stored on your browser as they are essential for the working of basic functionalities of the website. We also use third-party cookies that help us analyze and understand how you use this website. These cookies will be stored in your browser only with your consent. You also have the option to opt-out of these cookies. But opting out of some of these cookies may affect your browsing experience.
Necessary Sempre abilitato
Necessary cookies are absolutely essential for the website to function properly. This category only includes cookies that ensures basic functionalities and security features of the website. These cookies do not store any personal information.
Functional
Functional cookies help to perform certain functionalities like sharing the content of the website on social media platforms, collect feedbacks, and other third-party features.
Performance
Performance cookies are used to understand and analyze the key performance indexes of the website which helps in delivering a better user experience for the visitors.
Analytics
Analytical cookies are used to understand how visitors interact with the website. These cookies help provide information on metrics the number of visitors, bounce rate, traffic source, etc.
Advertisement
Advertisement cookies are used to provide visitors with relevant ads and marketing campaigns. These cookies track visitors across websites and collect information to provide customized ads.
Others
Other uncategorized cookies are those that are being analyzed and have not been classified into a category as yet.
ACCETTA E SALVA